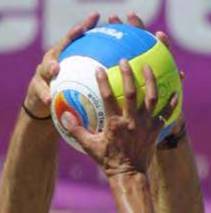 5.7 In a match SUI vs. NED (W), the ball is played legally by both teams above the net, in a joust and then lands outside the court of NED. Who now has the serve?

The team who now has the serve is the team whose court the ball has landed outside (i.e.: NED will now serve), SUI is ruled to have hit the ball out. It is for this reason that a ball that is played by both teams in a joust and then hits the antenna would be called as a replay i.e.: both teams hit the ball out. A 2nd referee should indicate very quickly in these two circumstances which team now has the serve to assist in the 1rst referees judgement (and if necessary the player at fault). (trad.: in caso di doppio tocco – tocco simultaneo a muro –  è punto della squadra dalla cui parte è uscita la palla)

5.9 The ESP (M) team serves the ball. The receiving player of ITA plays the ball overhand, (hard driven ball defence) and carries it. Play continues. At the end of the rally the ESP team complains to the referee that this technique is not legal when receiving service. The referee replies that he considered the serve a hard driven ball. Who is correct?

The player is correct. The service is a specific exception to the rules that define a hard driven ball. It is illegal to receive a served ball in this way. If the player contacts the ball overhand with fingers, (ie: setting the ball) this contact must be clean. Additionally the player may not carry or hold a ball that has been served. (trad.: è vietato ricevere la battuta in modo sporco anche se la battuta è forte) 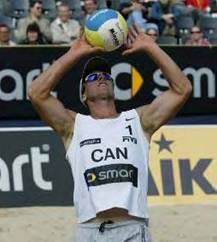 5.10 The player of SUI (M) sets the ball to his partner using a technique that involves a quick but mistimed contact with the fingers (double contact). In considering this setting technique what factors should the referee look at?

The referee should consider:

(1) The timing of the hands in the contact (ie: did the hands contact the ball simultaneously or separately?)

(2) How much of a technical error (i.e.: mistiming of the hands) has occurred with this set?

(3) Is the set an attack hit? In this case it is not applicable as they were setting their partner

(5) Is this fault consistent with calls of a similar nature and at the appropriate level?

The referee should not consider:

(1) The players position prior, during or after the set. A player can potentially complete a legal set from any position.

(3) The spin or rotation of the ball after contact. They should focus specifically on the technical correctness (cleanness) and duration of the player’s ball contact.

5.15 The player of USA (M) sets the ball to his partner using technique that involves a long and protracted contact time (carry) with the hands. In considering this setting technique what factors should the 1st referee look at?

The referee should consider:

(2) Is the set an attack hit? In this case it is not applicable as he was setting to his partner

(3) The cleanness of the contact. Were the hands / fingers simultaneous in contacting the ball or slightly separate in their actions?

The referee should not consider as definitely indicating a fault:

(1) The players position prior, during or after the set. A player can potentially complete a legal set from any position.

(3) The spin or rotation of the ball after contact.

Referees should focus specifically on the cleanness and duration of the players contact with the ball (time of contact between first and last contact points). It is also important that referees are consistent in their expectations of standard between the ball being carried and double contacted.

Referees must be aware that there are many techniques by which players may gain more control of the ball when setting by prolonging the contact (carrying). 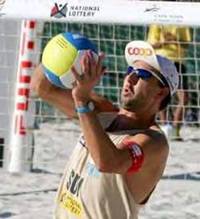 5.11 The player of CAN (M) receives the ball as a first contact from an attack by a POR player. What factors should the referee consider in judging this contact?

The referee should consider their judgment in 2 stages. Initially he / she should decide if the ball is a hard driven attack or a soft attack. Factors in judging this include:

(1) Does the player have time to change his technique?

(3) Did the speed of the ball change due to a block or hitting the net?

(4) Is the action offensive or defensive in nature?

If the attack hit is not considered hard driven (ie: soft attack) the referee must consider the following:

The contact must be one action and not carried (if the contact does not involve finger action). Similar criteria can be utilized if the first contact is after a block.

5.12  A player from ARG (M) spikes the ball towards the opponent’s court with great speed. It slightly touches the block of the CUB player and does not alter its speed or direction substantially. The other CUB player defends the ball by carrying it slightly with open hands (hard driven defence). Should the referee in this case allow this defensive action?

Yes. Although this contact is the second contact of the CUB team, it is legal to play the ball in this way. The referee must be sure that the ball still satisfies the criteria of a hard driven ball especially regarding the time the defensive player has to change their technique of playing the ball. If the block touch significantly changed the speed to the ball (effectively making it not a hard driven ball), the contact would be penalized as a held ball.

5.13 The BRA (M) player jumps and spikes the ball with great speed and force. Its trajectory then takes the ball into contact with the top of the net that slows the balls speed down greatly. The player of GER in defending plays it with open hands slightly carrying it (hard driven ball defence). Should the referee allow this defensive action?

No. This situation is different from 5.12 above in that the ball has substantially changed its speed and therefore the ball is now not hard driven. The referee must strictly check the criteria for hard driven and soft attack many times during a match, fully understanding the consequences of this in establishing referees expectations as to how the defensive player will play the ball.

5.14 During the match ENG vs. INA (W) there is very little blocking due to the strong wind and poor ball control. In many rallies, the women of both teams attack the ball from a standing position to each other. Some of these attacks are defended in a slightly held (hard driven ball defence) manner. What criteria should the referee look at in judging this contact?

5.16 During a men’s match JPN vs. NED the ball is attacked very strongly by the NED attacking player. The defending JPN player reacts in defending the hard driven ball by utilizing a defensive technique with both wrists inverted (i.e.: fingers pointing downwards to the ground on both hands), and carries the ball momentarily. The 1st referee whistles and calls the JPN player for a carried ball. Is this decision correct given that the ball was hard driven and the player’s action purely defensive in nature?

Yes, the decision of the referee is correct.

While much of the criteria for a hard driven ball have been met, (speed, player’s action etc) the rules specifically state that this situation is illegal.

Because this technique involves both wrists being inverted (thus fingers pointing downwards to the ground) the referee can potentially consider this a carried ball.

Referees should act with conservatism in calling this fault only penalizing when the contact was not momentary and the wrists of both hands pointed downwards. 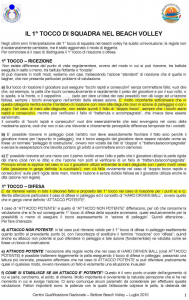 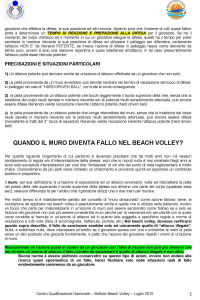 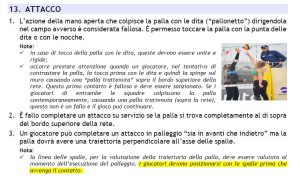 Back to Top ↑
We use cookies on our website to give you the most relevant experience by remembering your preferences and repeat visits. By clicking “Accept All”, you consent to the use of ALL the cookies. However, you may visit "Cookie Settings" to provide a controlled consent.
Cookie SettingsAccept All
Manage consent

This website uses cookies to improve your experience while you navigate through the website. Out of these, the cookies that are categorized as necessary are stored on your browser as they are essential for the working of basic functionalities of the website. We also use third-party cookies that help us analyze and understand how you use this website. These cookies will be stored in your browser only with your consent. You also have the option to opt-out of these cookies. But opting out of some of these cookies may affect your browsing experience.
Necessary Sempre abilitato
Necessary cookies are absolutely essential for the website to function properly. These cookies ensure basic functionalities and security features of the website, anonymously.
Functional
Functional cookies help to perform certain functionalities like sharing the content of the website on social media platforms, collect feedbacks, and other third-party features.
Performance
Performance cookies are used to understand and analyze the key performance indexes of the website which helps in delivering a better user experience for the visitors.
Analytics
Analytical cookies are used to understand how visitors interact with the website. These cookies help provide information on metrics the number of visitors, bounce rate, traffic source, etc.
Advertisement
Advertisement cookies are used to provide visitors with relevant ads and marketing campaigns. These cookies track visitors across websites and collect information to provide customized ads.
Others
Other uncategorized cookies are those that are being analyzed and have not been classified into a category as yet.
ACCETTA E SALVA